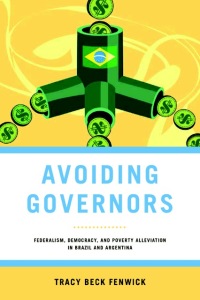 We are pleased to announce that the book will be launched by Dr Mariana Llanos, ANCLAS visiting fellow.

With the goal of showing the effect of domestic factors on the performance of poverty alleviation strategies in Latin America, Tracy Beck Fenwick explores the origins and rise of conditional cash transfer programs (CCTs) in the region, and then traces the politics and evolution of specific programs in Brazil and Argentina.

Tracy Beck Fenwick is a lecturer in the School of Politics in the College of Arts and Social Sciences, and she is the Director, of the Australian Centre for Federalism (SPIR). She was previously a Post-Doctoral Research Fellow at the Australian National Centre for Latin American Studies at ANU, and a Post-Doctoral Fellow at the Johnson-Shoyama Graduate School of Public Policy at the University of Saskatchewan. She completed her doctorate specializing in Comparative Politics at the University of Oxford, U.K. in 2009 (St. Anthony’s College). She holds a M.A. in Comparative Politics (Developed) and a B.A. in Latin American Studies and Economics from McGill University, Canada.

Dr Mariana Llanos is a Lead Research Fellow at the GIGA German Institute of Global and Area Studies in Hamburg, Germany. Her research focuses on comparative political institutions in Latin America, particularly, on the countries of the Southern Cone. She has published numerous articles on legislative, judicial, and presidential politics.

The launch will be followed by light food and beverages.

For catering purposes only please RSVP at Eventbrite by COB Monday 7th March.